When a gunman opened fire at the Lekki toll gate on a Saturday afternoon in November last year, he was not confronted by the security guards manning the gates for hours and even days…. 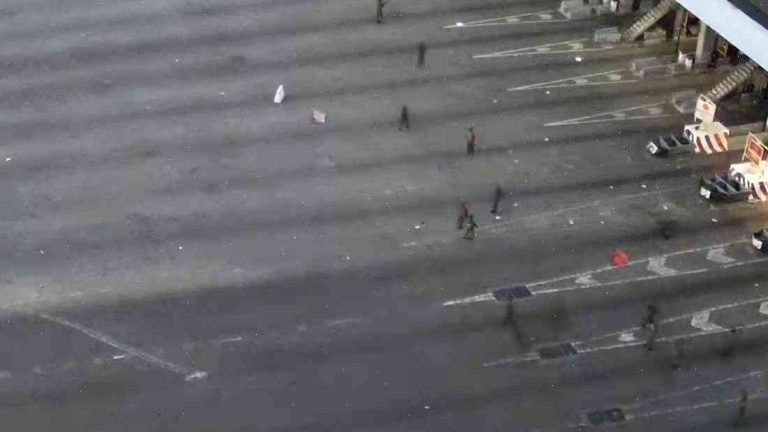 When a gunman opened fire at the Lekki toll gate on a Saturday afternoon in November last year, he was not confronted by the security guards manning the gates for hours and even days. The guards and the gunman, who was using a firearm that was smuggled into the country from Ghana, used the toll gate by foot and fled, heading towards Ikoyi. But six days later, a few metres from the toll gate, on the right hand side of the turn, the guard and the gunman were killed in a gun battle that wounded another guard. Hours later, about 2 a.m., a few hundred meters away, a mechanic, Enoch Solomon, and two men riding pillion in a red Toyota Hiace bus were ambushed on their way to refuel. The surveillance camera footage we have seen does not answer all of the questions. But in this brief report, we attempt to answer some of them.

The guard who was shot at the toll gate on the afternoon of November 11, 2018, is identified as Ayodele Akinola, who was believed to be a relative of the contractor on the job, A.O. Bakare, and was reportedly about to return to work with his colleagues. Four days later, security video footage that was released last week and released on August 14 showed only Mr. Bakare, who had received bullet wounds.

Yet on the very same day — Sunday, November 11, 2018 — the security video camera showed only Mr. Akinola. Neither the guard nor Mr. Bakare were shown in the tape six days later, when the guard, or Mr. Akinola, was gunned down at the toll gate.

This was of particular interest to campaigners for those killed that day: the children of Mr. Bakare and the mechanic.

Achinoye Lawal, who posted the footage on Facebook that Sunday, September 9, wrote to the Lagos State Police Public Relations Officer (PPRO), Jimoh Moshood, and asked him if the shooting had happened all over again. Mr. Moshood replied that the video footage that was released was from an incident, not the recent one that had taken place, which he noted, “captures the fact that N51m was paid to the contractor for being paid for 8km2 work at Ikoyi Bridge and 8km2 work at Lekki Bridge, which the employee is presently undergoing treatment.”

“I put it as simple as it is,” Mr. Lawal told Abuja On The Corner. “The contractor said he was killed because he had evidence of a bribe payment. The Lagos State government sent one of their aides to look for bribe payments, and paid money and all,” he said. “One day the aide told him that there was no more money in the account and, when the guard went to withdraw his money, they shot him.”

In a statement to Abuja On The Corner dated June 28, 2019, Lagos State House of Assembly Speaker Mudashiru Obasa, an APC member, noted that the security guard’s $2,500 bribe to the contractor “costed my friend his life.”

He then asked the contractor and the aide to: “Respond to allegations of murder, misconduct, bribery of officials of the Lagos State Internal Revenue Service (LIRS) by your staff as reported in an investigation by the House of Assembly Committee on Public Accounts.”

The lawmaker said: “I have gathered from information that the contractor and his staff had been collecting bribe from LIRS officials in December, 2014.”

Records filed in court by LIRS in December, 2014 indicated that Mr. Bakare’s firm, M/s. E.A Bakare Ltd, did receive $2,500 for “SME, which required payment to be made through a bank account from which the money is later converted, into Naira, and paid to a contract in favour of Katsina State government.”

BEST TV REVIEWS: The Beatles: Get Back, Blood and Blue, Caroll Spinney