Welcome to the Club: 25 Alabama Warriors

Soldiers whose lives are cut short and not served properly are paying the price – one young man was at the centre of controversy, the university in his hometown – his college – fought… 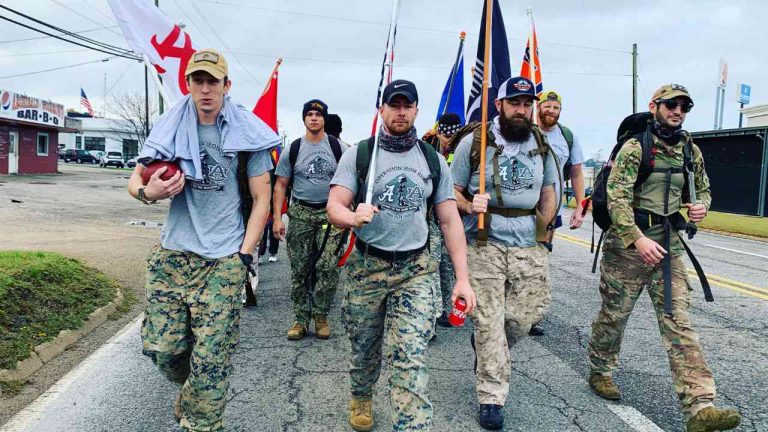 Soldiers whose lives are cut short and not served properly are paying the price – one young man was at the centre of controversy, the university in his hometown – his college – fought to conceal his death and his identity and even tried to lay off mourners – but on this trip they came forward to say his name for the first time.

And this was the last stretch. After 29 in BAGGARD to Winfrey, and inviting the leadership of Lady Gaga to come be an honorary Warrior at a closing ceremony in town – it was time to head off.

Local Airmen left hard to miss and leaders said they were ready – she wrapped up and waved to the crowd, but then suddenly struck the BAGGARD salutes and it was over.

Walking from Birmingham to Auburn back up Highway 72 – it was slow, but it was steady.

As it was passing a high school, and with temperatures reaching the upper 90s, the main takeaway for me was the support.

Multiple cagers from the women’s team at Pelham High School were out there with their fellow student supporters – it was very encouraging to see.

And it all came back to that poignant final moment for many – how it made them feel just to be there. A final ROTC procession and then past the veterans memorial monument where our veterans proudly stand – standing, this being CAMP NICHOLAS – I could see myself in their position, but sharing it with them.

And they stood there, with a blue haze of smoke coming from the off-ramp behind them.

Soldiers at heart, you betcha, they liked me doing what I was doing.

They loved when I pulled up to them and everyone gave me a high five and tossed a US flag.

The scene at the center was a parade of Hero generation soldiers with hearts full of veteran pride and love, meeting the guests of honor for them, Jim Monk, who proudly represented Central Alabama veterans and who laid to rest the Purple Heart winner, a brother in arms and hero at center stage.

And with so many of my heroes from Alabama all around, I felt grateful.

In 24 hours, a group of students and leaders, each with their own reasons, and ties, came together to tell that story and make that journey. They visited the young man’s childhood home in Johnson Space Center and spoke out about his death, his heroic service and sacrifice. They took a look at his unfinished training and chose a reminder:

Touring the area where our heroes stood guard for 23 years with a union steward on one side and the Black Hawk helicopter they fought alongside as crew chief – on the other side, on a hilltop.

Standing in that great statement for a moment in your day made me think back.

I spent three weeks just up the road in North Alabama.

And one day the engines of the Black Hawk, thundering past on a training mission, blew an explosive charge over the heads of our Great War veterans, as they were burying the recently returned soldier who did not have a proper burial.

Jim Monk was a Purple Heart recipient, who went on to earn the coveted Distinguished Flying Cross. He was buried at Camp Nicholas, a final monument to the lives of the heroes who made the opportunity to serve in World War I possible for young men like him.

Many learned of his death from another great friend, the assistant director of the Tuscaloosa-based MDA, Rusty Mann.

How proud he was, I think, to be welcomed to our community by our youth and leaders.

And Jim Monk, as the newest member of our Warrior community, is not alone.