A blaze that tore through a tour bus carrying 45 people Thursday evening trapped dozens of them in the blazing bus and fire in southeast Bulgaria, authorities said. A government official said 12 children… 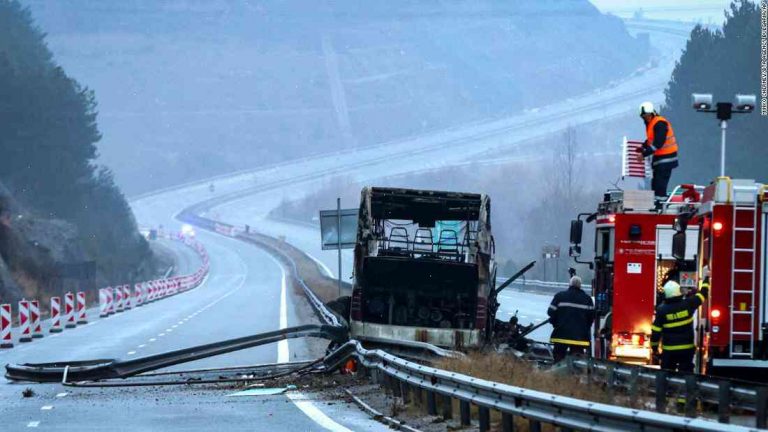 A blaze that tore through a tour bus carrying 45 people Thursday evening trapped dozens of them in the blazing bus and fire in southeast Bulgaria, authorities said.

A government official said 12 children were among the victims.

Those killed were heading to a concert at a cultural centre in the town of Tomislav Ganev near the border with Romania, and a total of 43 people were on board, the regional administration said. It said they were heading to Romania for a cultural program.

Interior Minister Sotir Tsatsarov said the driver lost control of the bus, and the blaze started after the driver parked the vehicle near the entrance of a cultural center.

Authorities said 45 people were on board, including the driver, and the vehicle had a capacity of 33. The Bulgarian media reports said the bus was carrying Bulgarian citizens and also Romanian people. The U.S. Embassy in Sofia confirmed it was giving assistance to Bulgarians, but would not confirm any Americans were among the victims.

In a press conference, Vice Prime Minister Yordan Stepanov said the cause of the accident was unknown.

“The fire spread over an enormous area, and it was impossible to rescue everyone,” Stepanov said.

Dozens of firefighters and firefighters from neighboring towns took part in the rescue operation, and all the victims were found inside the bus, Stepanov said.

Bulgaria’s Health Ministry said it was treating 46 people, mainly with severe burns, at hospitals in the city of Tovarnik and in neighboring Varna.

Stepanov said the driver, dead at the scene, had received only speeding tickets for speeding over the past few months, and had been providing the government with information about where and when the fines were paid.

Lawmaker: Government may be stopping women from acting to fulfill public demands