Turks protesting against violence against women clashed with police in Istanbul on Saturday, as hundreds of women held up signs and banners at the Santa Muerte shrine. The “Santa Muerte (Saint Death) Shrine” is… 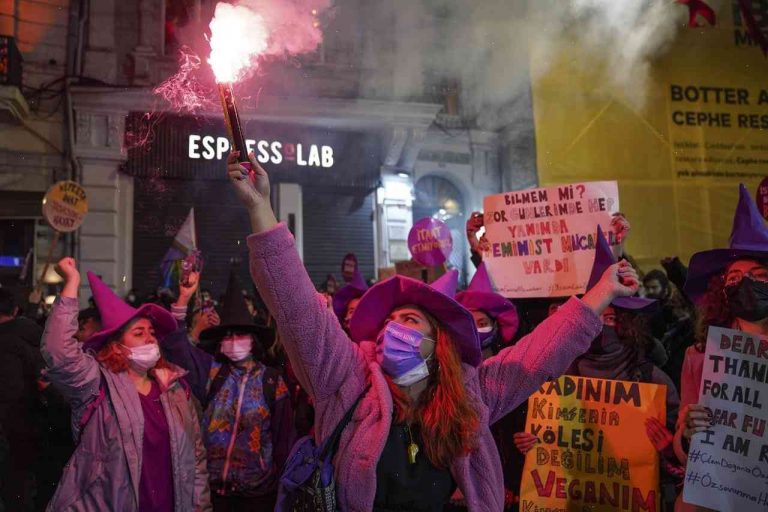 Turks protesting against violence against women clashed with police in Istanbul on Saturday, as hundreds of women held up signs and banners at the Santa Muerte shrine.

The “Santa Muerte (Saint Death) Shrine” is a Catholic shrine on a hill in the city.

The shrine is known for its picturesque red-roofed buildings made of red wooden beams, indigenous Irish-style shamrock decorations and men adorned in long, dark hair.

As police in riot gear attempted to disperse the group of about 500 women, many shouting slogans, the group shoved and shouted at the police. Some women started hurling stones and smoke bombs.

Barricades were set up by the crowd and some roads were closed.

About 700 women formed a human chain around the shrine, shouting anti-government slogans. Some held up signs saying “we cannot continue living in our ignorance” and “the people of God have struck back”.

Unidentified men tried to break through the chain with branches and dirt from cars and threw sticks and stones. They also tried to stop women from holding up their banners.

Dozens of women suffered abrasions and bruises after police hit them with batons and birdshot and cuffed them. They were all brought to ambulances and taken to hospitals for treatment.

At least 30 people were arrested, including a police officer, according to the Aksam state-run news agency. It reported that the protesters used fireworks to target police, but police said they made only spot arrests in the area.

In February, 12 prominent human rights defenders, one of whom was an Islamic scholar, were injured in an attempted assassination at the same shrine.

In 2013, hundreds of women protested against a stabbing at the shrine.

For the uninitiated, Santa Muerte is a medium-age female Mexican holy figure who is revered by many in Mexico, as well as Venezuela and other Latin American countries.

The AFP contributed to this report.