The Islamic State on Sunday claimed responsibility for twin bombings in Uganda’s capital on Saturday. The attackers targeted a popular restaurant where Uganda’s elite have been dining since 2007. Authorities said five people died… 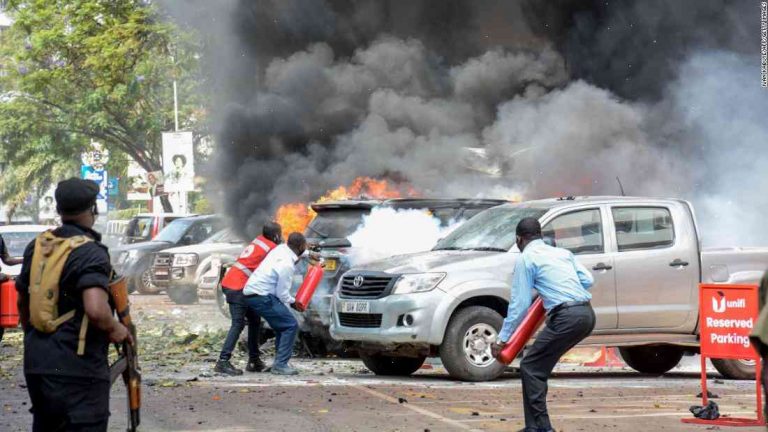 The Islamic State on Sunday claimed responsibility for twin bombings in Uganda’s capital on Saturday. The attackers targeted a popular restaurant where Uganda’s elite have been dining since 2007.

The New York Times reports two of the blasts in Kampala were inside the hotel; the third hit outside the property, at a mosque nearby.

“The IMU claim responsibility for the Kampala Restaurants incident today, as revenge for the reckless bombing and massacres carried out by the apostate Ugandan government. As The Islamic State announces its allegiance to Abu Bakr al-Baghdadi, sowing chaos throughout the world, we give thanks to Allah, that the ruler of Muslims such as his [ugandan] kuffar army commanders have abandoned the caliphate. We ask Allah to forgive them their sins and grant us victory over them.

The first attack occurred at about 11:30 a.m. on Saturday at Al-Huda mosque, an influential gathering place for Ugandan Muslims, according to Bloomberg News.

A large explosion “compromised the mosque,” according to the BBC.

There are conflicting reports on the nature of the explosion inside the hotel, reports the New York Times. Some say a hotel staff member was among the casualties. Others say the hotel’s restaurant exploded “exploding guest rooms and wounding guests,” according to the BBC.

Uganda has suffered several bombings in recent years. In 2012, a Ugandan soldier was killed by a suicide car bomb in Mogadishu, Somalia. In May that year, a similar attack on Uganda’s diplomatic mission in Addis Ababa, Ethiopia, killed scores of civilians.